I had a very interesting couple of days. This Whole30 has been very different from the previous two I’ve participated in. This last week, I was so-completely-angry about it. I didn’t want to have anything to do with it, I lost belief in it, and I thought I was being silly for continuing.

This lasted for a good 4-5 days. I didn’t care how much time I had left, I just wanted to stop then and there. But I somehow continued. I’m not sure why. Usually, if I’m uncomfortable with something for a couple days, I listen to my body. I’ve no clue what made this time different.

After a while, the anger just went away. It was SO weird. It’s never happened before. I must have been having some crazy mental or hormonal issues going on at the time. They’re the only things I can think of.

What do I have in store for after Whole30? I’d love to be able to do some Julia Child recipes, a pecan pie, and some early holiday recipes. Some will be paleo, some won’t, but always from scratch. 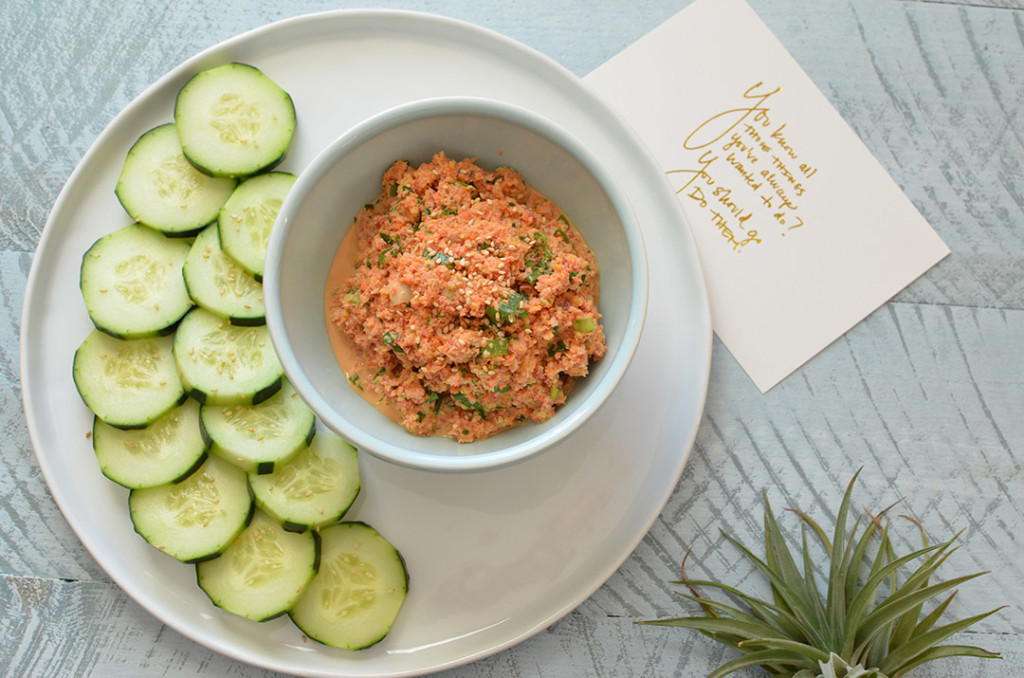 The Woodstock Farmer’s Market Carrot Dip from New England Open House! What a name. I shortened it in the title, just so it would all fit on one page.

I’m not sure if a carrot dip sounds strange to you, but it did to me. I wasn’t really sure what to expect. Surprisingly, this had a great Asian flavor to it and it was savory as well as naturally sweet from the carrots.

It went really well with cucumber slices, but then I became lazy and just scooped it onto my plate. You could eat as a salad since I’m proof that it works that way.

You can use a hand grater or a food processor to prepare your carrots. I used the food processor for ease. After that, everything is a cinch. Just throw all the ingredients in and mix, then throw it in the fridge for the flavors to settle for a couple hours before eating.

Have you ever had a carrot dip before? What did you eat it with?