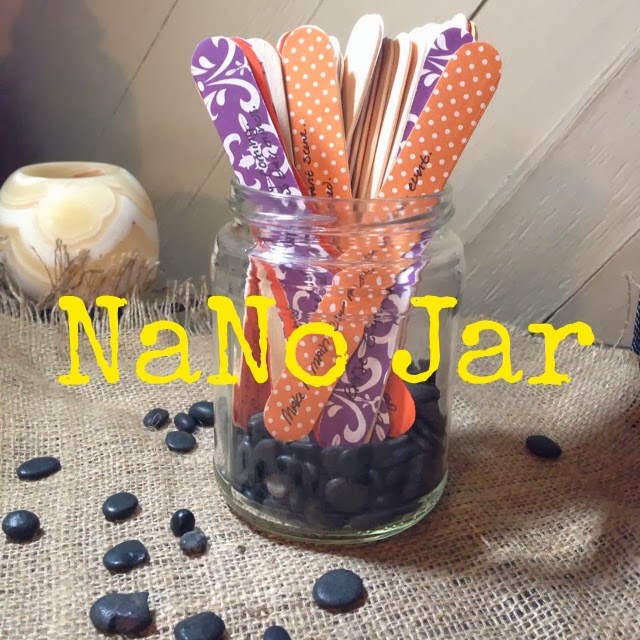 The NaNo Jar sits on my desk and is full of 30 different jumbo popsicle sticks with different instructions. I pick one stick a day and have to do whatever it says on the stick. If I don’t particularly like what it says on the stick for what I have planned that day, I will allow myself to pull one other–with the understanding that I now have to use the original stick the next day. I can only switch out one stick a day and have to keep to that.

Here are the 30 prompts I used!

1. What is your protagonist afraid to admit to himself? Bring it up and make it impossible to avoid.

2. What’s an event that passes with little notice? Invent a dire consequence that no one sees coming.

3. Add: A character that is modeled after someone you know that sparks some sort of emotion.

4. Add: A character from a different social strata, a symbol of these times, a harbinger of the future, or a sign from the gods.

5. What is your character’s conception of god? Humble = reward, Not = punishment, or vice versa.

6. Create an event/action that reminds your character he is not in charge of his own destiny.

7. List 20 things your protagonist notices in the story that no one else does. Plant each one.

8. Have a character act strangely in a scene so that the reader questions/wonders the reason behind it.

9. Make a main character a victim of some event.

10. Write a scene where the main character shows humanistic virtues.

11. Show a character  reach rock bottom. All hope is lost.

12. Present the opposite argument as powerfully as the truth, weave it into your dialogue.

13. Reverse a predictable plot. Take any idea and immediately discard the first thought. Do the opposite.

14. What’s the worst thing that could happen to your character right now? Do it.

15. Have something revealed to the characters. Bring in another question to replace the original and make it even more pressing/interesting.

20. Put a character in a situation/relationship that goes against his values.

21. Take an emotion that is in the current scene. Replace it with something less expected.

22. Make a character lose something important and can never get it back. Make it something he wants most, but rejects it.

23. Have a character lose control of himself/emotions. What are the repercussions? Make it worse.

24. Make a character do something he finds embarrassing on accident. Who notices, yet says nothing.

25. Spill a secret at the worst possible time.

26. Who is your protagonist afraid to let down? What is the sacred trust between them? Break that trust.

28. What is the hardest action your protagonist will have to perform? Make it something he’s sworn he will never do.

29. Assume the reader saw something coming. Change it to something that will blow their minds.

30. What truth does your protagonist cling to the hardest? Reinforce that truth three times throughout the story. Then destroy it–it’s wrong.

The instructions come from my own personal learnings, but mainly from two outstanding books:

The links below are affiliate links. This means that I may receive some commission at no additional cost to you. All of these items I use personally and find them valuable. I would never recommend something I don’t approve of. Thank you for your support! It’s what keeps Apron Warrior alive!

More in this series:
The Basics.
– Pantser or Planner: Ways to help prepare you prepare for your story.
– The NaNo Jar.
-NaNo Jar 2.0
– Food Prep: What to eat and the easiest way to do so.
– A Space of Your Own: Creating solace in a time of chaos.
– Holidays and Family: What to do when you have to go out.

« NaNo Prep: Planner vs Pantser: Ways to help you prepare for your story.
NaNo Prep: Food Prep: What to eat and the easiest way to do so. »