I just got back from the South!

Yes, it was quite an adventure! I saw a ton of beautiful places, enjoyed great company, and had a LOT of great food. I wouldn’t say I ate very healthy, but I ate some darn delicious food.

Now, I imagined all of the South to be crazy hot. I was stressing out because I don’t do well in heat. I sat in my home, packing my clothes to be as light as possible. California had an insane heat wave the week we left. It was really miserable. I sucked it up and told myself the South will be worse.

Once we arrived, we walked outside and my husband and I say, “oh, this isn’t bad!”

It was cooler in the South the whole couple of weeks we were there than it was in California! At one point, I even realized the clothes I packed was too light and I was going to be cold.

My first stop was Atlanta. If I was to recommend one place to eat there, it would be Mary Mac’s Tea Room. This place had a great vibe to it. It opened in 1945, and is the last surviving of the 16 tea rooms in Atlanta. Tea rooms are called as such because women were not allowed to open/own restaurants. To get around all of that, women would call them “tea rooms.”

You get a lot of food at Mary Mac’s. A lot. The fried chicken was the best I’ve ever had. The collard greens were the most tender I’ve ever had. My favorite though, was the tomato pie. I lovvvveeed that dish.

Unfortunately, I didn’t get any pictures of the food. I took some video, but it wasn’t very good. Just check out their website and take my word for it! It’s delicious.

Second stop on the trip was Mobile, Alabama. My sister and her family live there and we were able to stay at their house. Completely beautiful and quaint, Mobile took me for surprise.

Recommendation for food in Mobile: Meat Boss BBQ. Get the Spicy Carolina Sauce and whatever meat you like and you’ll be happy. The parking is packed and the place closes at 2 pm though, so make sure you get there with enough time to spare!

Okay, so enough with my trip, you want to see what I’ve been making.

This is the Olive Oil Poached Egg from Bobby Flay’s Brunch at Bobby’s. 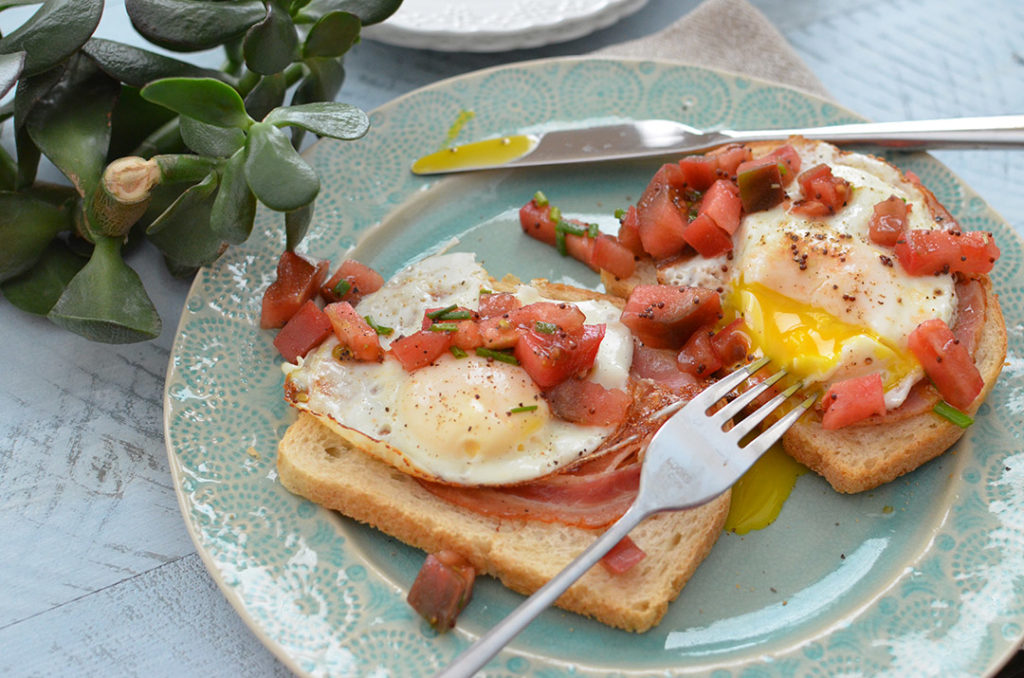 So the way Bobby instructed you to make the poached egg seemed more like a fried egg to me, but it was still good. Yolk grosses me out (I know the majority of you are probably gasping), so the dish you see up above is for my husband. For myself, I cooked it a little more “medium” poached/fried.

The pancetta on this was lovely. I liked it so much more than the usual Canadian bacon.  I also loved the tomato relish that you put on top.

Since I don’t like yolk, however, the dish was a little too dry. I needed that hollandaise sauce, or any other kind of sauce to help soften the bread. If you like yolk, you shouldn’t have any issues. If I made this again, I would either add more olive oil to the relish, or I would make a hollandaise. Over all, quite tasty!